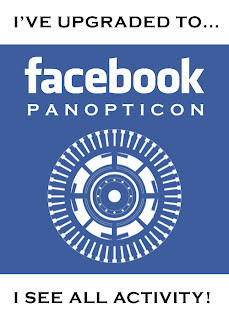 The digital gaze that is Facebook, can be considered a modern example of the Panopticon. The panopticon was originally designed by Jeremy Bentham as a prison which had a watch tower in the middle and on the perimeter are cells with inmates who were unable to tell whether they were being watched, however the visibility of the tower at all angles made them always feel so.
Although Bentham’s Panopticon did not come in to fruition, Michel Foucault used this design of the prison to describe societies requirement of discipline and normalization through observation. Other than the main example of the prison that Bentham used, Foucault discussed in his book Discipline and Punish: The Birth of the Prison that the idea of the Panopticon can also be implemented in hospitals, workshops, schools and prisons (Foucault, 1975). Foucault goes on to say that whenever one is dealing with a multiplicity of individuals on whom a task or a particular form of behavior must be imposed, the panoptic schema may be used (Foucault, 1975). When discussing Facebook as a modern discourse that works in the way of a Panopticon, this quote from Foucault makes the correlation evident to me;

This disciplinary aspect of panoptic observation involves a productive soul training which encourages inmates to reflect upon the minutia of their own behaviour in subtle and ongoing efforts to transform their selves (Foucault, 1975).

My awareness that what I post on Facebook is potentially being observed by the people who are categorized as my “friends” on Facebook always has an impact on what pictures I choose to post and what I put as a “status update”. Many a time have I logged on to Facebook hotheaded about an issue only to realize that my thoughts and opinions on said issue could result in an all out Facebook thread war or potentially rub a “friend” of mine the wrong way. This reflection of the minutia of my behavior, as Foucault wrote, transforms the impulsive act of ranting about personal,usually trivial issues over Facebook, because let’s be honest, who cares?

Are you more cautious of what you post on Facebook, knowing your "friends" could see it and potentially be offended?